Spafford are known for their astonishing improvisational ability and off-the-cuff extended jams, Spafford paints a picture in real-time each night with a musical palette known only to each other. It’s a private language comprised of both their talent as musicians as well as their formidable catalog of influences, spanning 90’s alt-rock radio hits to Steely Dan and The Crystal Method. Each Spafford show is a sonic pilgrimage, the journey of a team of musicians so in tune with each other that a single note communicates intent and purpose. Spafford is amongst the most creative and hard-traveling bands on the contemporary jam scene, performing countless sold-out headline dates along with high profile festival sets at Bonnaroo Music & Arts Festival, Firefly Music Festival, and many others. 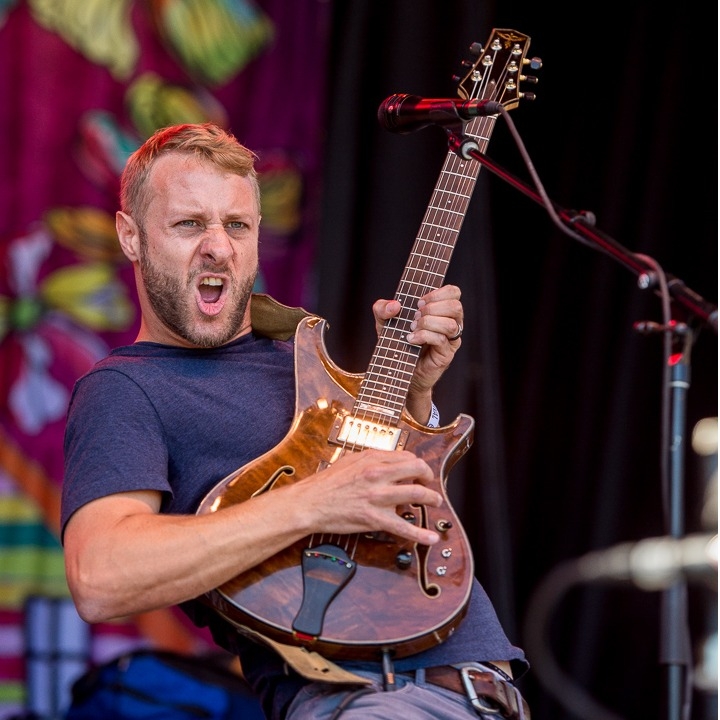 Hey hey, it’s Brian. I was born and raised in northern New Jersey. When I was twelve, I started playing music in various basements with friends from my neighborhood. The first album I ever released was actually called ‘Live in the Basement’ - with my high school band, Albacore. At an early age we were serious about writing our own music because to us that seemed way more exciting than learning other people’s songs. This evolved into my obsession with improvisation and using music as an in-the-moment release of feelings and thoughts that I wasn’t so good at sharing vocally.

The guitar became my channel to get these emotions out and playing with others taught me to combine those explorative ideas in a group setting for something really special. I always dreamt I would be in a rock and roll band - then I met Jordan and we formed Spafford in 2009.  With one foot in front of the other, overcoming challenges and keeping a positive attitude has allowed me to live out my childhood fantasy of becoming a full-time musician.

Every day I am still working on achieving my goals. Every day brings new challenges, and every time I push through it gets me closer to my childhood dream. My philosophy - Never give up, never let anything stop you from becoming who you are inside.

In my off time I enjoy various other hobbies. Fishing, hockey, rollerblading, video gaming and gold prospecting are some of my favorites. I enjoy camping with my wife and want to travel the world. I especially am fascinated by all things ancient and I would love to see the pyramids in Egypt as well as many other civilizations across the globe.

Fun fact: I can spin two pillows on my fingers. 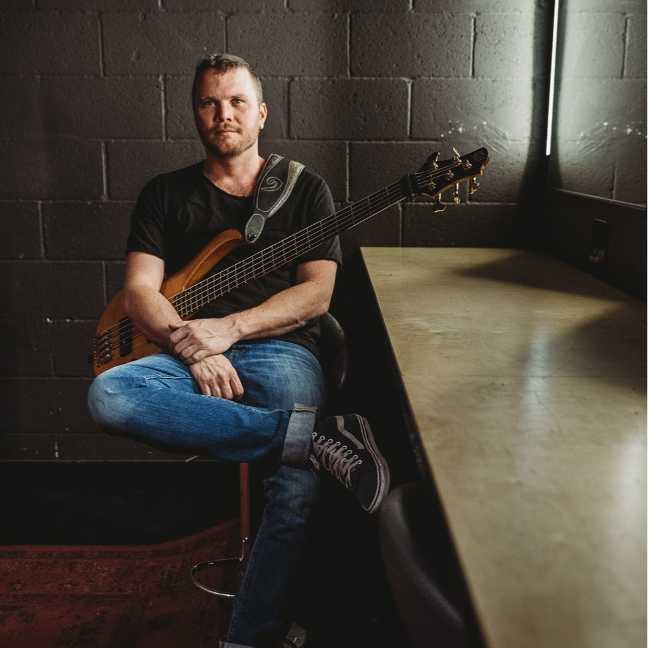 I’m not really sure where I am from. My birth certificate says I was born in Florence, AL, I was raised in Nashville, TN, and I live in Phoenix, AZ...but I think I may have been sent here from another planet to communicate to the world with specially tuned low-end frequencies. I’ve lived in every region of the United States except the Pacific Northwest.

Having been raised in a musical (earth) family, I picked my first instrument (the violin) in the 5th grade. Soon after that it was guitar, then a drum set, and then off to the races through a variety of instruments. I played different instruments in all sorts of ensembles over the years, but I really fell in love when I moved to bass full-time.

My inspirations come from all over...from a beautiful sunset to listening to jazz on a Saturday morning or sitting in traffic staring at other cars and wondering what the people inside of them’s lives are like. Do you ever look at a strangers and realize they have...like...their own entire world that they live in and which they are the center of? But I digress…

When I was kid I always wanted to be a structural engineer. Then I started going to concerts and had the realization that performing was what I wanted to do with my life at Nashville Riverstages watching Incubus.

I love science-fiction, especially the Cyber Punk variety, and two of my favorite authors are William Gibson and Richard K. Morgan.I also really enjoy Anne Rice (not cyberpunk, just good stuff that surprisingly will make you think).  I mostly like stories about post-apocalyptic, cybernetically  enhanced, not too far off from where we might end up type stuff. And samurai swords. Gotta have samurai swords.

I have seen pretty much every show and movie from 1990 to Now and can't find a good show on any streaming platform unless it's new because I have seen them all (my brother worked in a video store for years and got free movies and I watched every movie in the video store). The band often uses me as their personal IMDB when trying to think of an actor, actress, or director and what movie they did.

I love the bass because it fuses all of the elements of other instruments into a unique voice which only the bass guitar can capture.

“The bass guitar is rhythm, melody, and harmony all rolled in to one. It holds a lot of power over what the ear perceives.“ 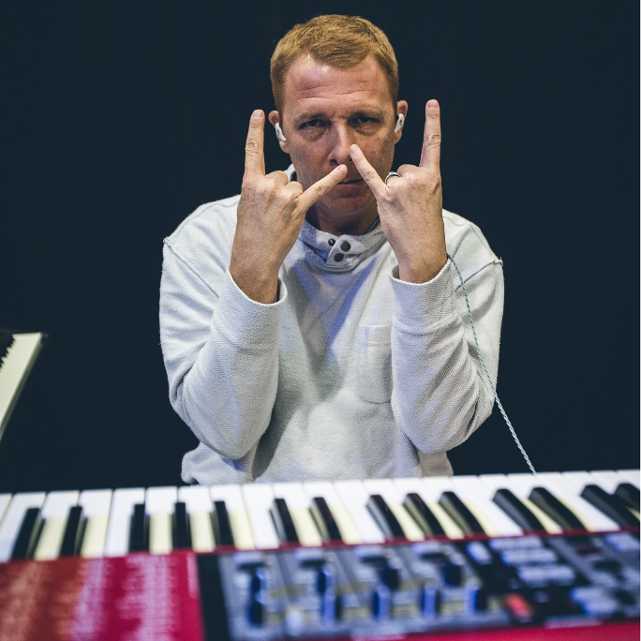 My name is Andrew Johnson, but for a long time most people have just called me Red. I’m originally from what used to be a small mostly farming town just west of Chicago called Belvidere, IL. I moved to Phoenix, AZ in 2001 and I’ve lived here ever since.

My grandfather was an incredible piano player and he passed that down to my mother, who in turn passed some of it along to me. I took piano lessons for two or three years as a kid but didn’t stick with it so I kind of figured the rest out on my own. I also sang in a Boys Choir through junior high and high school that gave me the opportunity to tour all over the US and Europe multiple times. I’ve been fortunate enough to get to play and sing in a number of different groups and bands since I was a teenager - all of them amazing learning experiences that have made me the musician I am today.

Some hobbies that I have outside of music are hiking, mountain biking, reading, and meditation. Meditation has been a huge part of my life for a long time now. I’m really just trying to be a better dude today than I was yesterday. I’m not always successful, but I keep trying. Ernest Hemingway once said, “There is nothing noble in being superior to your fellow man; true nobility is being superior to your former self.” It’s a lofty goal, but it’s worth a try! 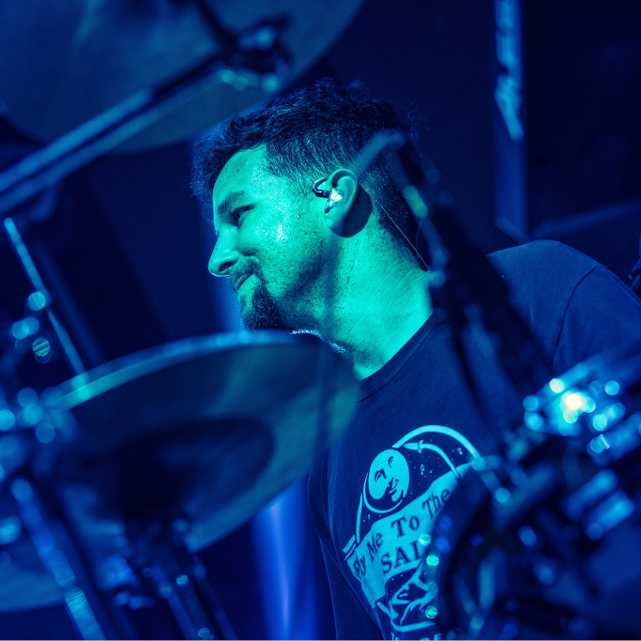 Hey! My name is Nick Tkachyk (tuh-kah-chick) and I'm from Tucson, Arizona. I have always been fascinated by music and rhythm. When I was a kid I enjoyed banging on pots and pans and “bonking” my head on the headrest in the car to the beat of the car stereo. My first concert experience was Garth Brooks when I was 10. I fell in love with everything the drummer did - the power, the creativity, the sound! The hook was set, I knew that drumming was what I wanted to do with my time here on earth.

Steve Gadd, Buddy Rich, and Dave Weckle are a few of my all-time favorite drummers. Jojo Mayer, Jon Fishman, and Justin Scott are my modern-day rhythmic influences. I have played in lots of bands and musical environments thus far in life, however Spafford tickles that childish intuition deep inside. When we improvise and jam, I am transcended to a playground where we are playing games and chasing each other.

I love experiencing all genres of music; Indie, electronic and world music are a few of the styles I like to dig into. In my free time I enjoy spiritual practice, riding my bike, and walking in parks.